I Wasn’t Going to Let Cancer Change Me

David is 19 years old and like many teens, enjoys playing basketball and video games, and loves hanging out with his Chihuahua, Frankie. But David’s path has not always been carefree and easy. At 17, David hadn’t been feeling hungry for a while. When he went in for a checkup, his doctor found something wrong with his blood. David was quickly sent to Lucile Packard Children’s Hospital at Stanford for tests.  He was he shocked to learn he had acute myeloid leukemia (AML), and would latter be diagnosed with ALL.

At first, David was very scared and not unlike many cancer patients thought, “Is this it?” His family had been through the trauma of cancer already.  David’s brother had died of a brain tumor when he was only two. So David knew he had to fight. It gave him strength knowing that his brother had gone through his cancer bravely, and he would have to do the same.

David faced cancer the same way he had always approached life – as a positive person with a winning attitude.

“I knew I was bigger than my cancer and that I could beat it,” he says. “I always seemed to make the best of it by surrounding myself with positivity and trying to see the bright side of a situation.”

But is there a bright side to having cancer? David thinks there is. 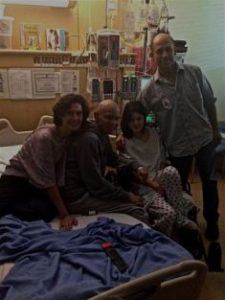 “I began to realize what is really important in life,” he says. “I had been letting little things that didn’t matter get me down. Now I value every day of my life. I also realized my family is the most important thing to me.”

Maybe that fact that his fraternal twin sister donated her life-saving bone marrow for his transplant had something to do with the last realization.

One of the ways David stayed positive was relying on his sense of humor. It seems like it would be impossible to maintain a sense of humor for the two, 2.5-month hospital stays his treatment required. But even through David’s three weeks in isolation following his transplant, he still managed to keep his positive attitude.

“I wasn’t going to let cancer change me. I’d joke around like I normally did.  I was always who I was,” he says.

David attributes part of his success in getting through these long hospital stays to the care of doctors and staff at Lucile Packard Children’s Hospital.

“They showed so much respect to me.  They treated me as an equal and even more importantly, as a friend, not just a patient,” David says.

David has also found support through his two hospital-based support groups.  He is a regular to the groups because to him, these support groups focus “much less on what you have and more on who you are and your life,” he says.

Today, David can be found at Packard informally visiting patients who may just have started their journey. David finds giving back to younger kids going through hospitalization or cancer is so rewarding that he has decided to become a Child Life Specialist. He will be finishing at his local community college this year and then hopes to continue his studies at San Diego State.

David calls the Child Life program “the coolest part about being in the hospital.”  It was where he could have conversations about “all the normal things in life,” which he says helped him get his mind off of everything he was going through. Now he is helping others at Packard through the same experience – talking through the tough times in their treatments or just sitting by a patient’s side chatting while watching basketball.

Sheri Sobrato Brisson is a brain tumor survivor who discovered the importance of self-reflection during her recovery. From her personal illness experience and a dozen years supporting families and children with serious illness, her life’s philanthropic mission is to empower families and children facing serious illness. She has started and facilitated support groups for children with illness and their families for over twenty years with organizations such as the American Cancer Society, National Brain Tumor Foundation, Ronald McDonald House, and Packard Children’s Hospital. She has served as Board Member for many children’s health nonprofit organizations including American Cancer Society San Jose, UCSF/Mt. Zion Auxiliary, Creighton Health Institute, and Okizu Foundation. Brisson received her master’s degree in counseling from Santa Clara University and her undergraduate degree in human biology from Stanford University.